Ryusuke Ito (Professor, Hokkaido University of Education, Artist) / 2015
Yuki Yamamoto's works have various contrary characteristics: abstract paintings, which appear difficult to understand, and accessibility as a product; rather blunt geometric patterns and tones of soft colours; the materiality of the resin and hand-drawn textures. Depending on the person, this balance must be an unconditional attractiveness, but to me there is an uncomfortable uneasiness about it.
As it has no connection to the social situation, it would be easier to just talk about his works in terms of its artistic characteristics, but since the artist is so painfully obsessed with painting theory, which is unusual for someone his age, I think it would be pointless to talk about only the appealing side of his works from the surface. Hence, in this text I would like to take a look at Yamamoto's works in an ideologically experimenting way.

Reading from the titles such as Invisible Space or Mienai Mieru [invisible/visible], Yamamoto is clearly particular about 'seeing' as his motifs are geometric shapes surrounding circles, and it is easy to associate his work with the works of op artists such as Victor Vasarely. Whilst in representational art artists recreate three
dimensional space (such as a mountain or a room) on a plane, the main concern of op art is the visual illusion. This means that motifs that are less likely to be recreated (such as geometric shapes) are chosen and only the sense of the three-dimensional space or movement is extracted from them (if the works' motifs are taken from real life and are created for an entertainment purpose, in which the visual effect is stressed, they would be trick art). The three-dimensional aspect of Yamamoto's images are created by the parallax as well as the movement of the viewer's perspectives. It can be perceived as a representation of time (like a holography) rather than a painting as a still image. The artist shares the awareness of the same issues with the painters from 1920s Absolute Film Movement (such as Hans Richter) as well as Oscar Fischinger, who expressed a sense of space with geometric motifs and movement (time) using a new medium called film.

On the contrary, painting cannot be anything other than an object as painting, and representation of reality is not really in the true attribute of the painting, from the perspective of painting theory of abstract expressionism, which denies illusion such as a sense of space, and there is also an attempt of putting image and objects together like Morris Louis, who painted by letting the canvas absorb the paint rather than paint on it. When we look at his work in that context, the image continues behind the surface over the layers of resin and paint underneath. If there was geoid in painting, it is where the geoid height is negative underneath the ocean surface. Yamamoto's work takes over the argument over the flatness in the history of post-war painting, and gives an op-art-like visual representation within its space that is thinner (or rather caved in) than a plane. As his work even incorporates the cheerful colour tones of pop art, Yamamoto pursues a kind of acrobatic feats in the history of painting (theory).

However, the dogma of painting history in reality reduced the importance of physicality through what was to come as minimal art and conceptual art. As this was not good for business, as a reaction to this, there emerged a movement called new painting in the 80s, which was essentially just about a return to the old idea of image. After that, there was a time of political correctness, and it was more about 'what was written' than 'what was painted'. That is to say, the visual art or the world itself, which had indulged the theory of
painting, was taken up as a matter for discussion. The illusion that the painting theory had, in which they thought that whilst retaining a pure plane without any physicality, painting had more potential than just to reconstruct a certain phenomenon but to create space that is potent, was later realised in the computer graphics (3DCG).

Hence the old 'theory of painting' is over, or in fact, it was overcome by the reality, but it appears that the argument over painting (not 'fine art') in Yamamoto's work is still an on-going process (considerably sincerely). It might just be the nature of western painting perhaps, but it feels like his paintings are in a similar situation to those 'kachigumi' of the Japanese immigrant community in Brazil [or 'victorists' after the second world war, who believed the war was still going on or believed Japan had won] or to that of science fiction such as Philip K. Dick's novel, The Man in the High Castle. Yamamoto's work keeps Modernist's nostalgic will, which goes along with his artistic (or general) conviction and competes with the consciousness of the time that the audience is at (which is now), which are the wonders of Yuki Yamamoto's work.

Having said that, when you look at his work with that in mind, there are some incongruous points.
I mentioned above that it was as if his paintings had 'negative points' in geoid height, however, they actually have a support base (a panel) with layers of resin as illusions sitting on top of another. The predecessor op artists and abstract artists made a great effort to find a way to create psychological multi-layered-ness to find a way to reconstruct an illusion of three dimensional space within a plane, whereas Yamamoto's paintings have a physical space of some millimetre thickness, which are layered by hand-painting, one could say that is 'cheating'.

The multi-layered-ness in Yamamoto's images is mainly a physical (or chemical) depth, and his paintings are a super thin three-dimensional work (which is hangable on the wall) rather than they are based on the rules of painting theory. To give an example, Yamamoto's paintings are like Rauschenberg's work with automatic door, Revolver II (1967), and Solstice (1968), they are more transparent objects rather than paintings. His early three-dimensional works such as closed Painting (2005) ※fig.1, in which 6 paintings are composed as a cube with depth on each plane, where the boundary is blurry between the cubical and the outside world, could be an important work in the future when one looks back at Yamamoto's work as a total.
Freeing from a spell of painting theory (or obsession), the most interesting thing about the matière of his work when you look at his work as three-dimensional is the translucent and transparent materials. Unlike marble stones, they are chemically produced materials, but they have a hand-made (hand-sanded) quality, and they are attractive in its craftsmanship yet they are not products. One of the materials that light can penetrate is bee's wax, with which artists such as Jasper Johns and Joseph Beuys exercised and the hand-crafted transparency of Yamamoto's work puts itself in the same context. Beuys' work, Fat Chair (1963), is one example, which tends to be discussed in relation to heat and fluidity, but what is compelling about Beuys' art is the artistic conviction and his fetish sensitivity as seen in the use of bee's wax.
Acrylic resin, the material Yamamoto uses, was introduced to Japan just before the end of Second World War. The design of the canopy of the P-51 Mustang, an American fighter bomber, had a futuristic shape and material such as a new streamlined plexiglass canopy, which was made up of flat, framed panels unlike the existing canopies at the time, as to saying America's supremacy for its technology and productivity.

Also as seen in the art and design field are Arman’s series of objects from 1960s, in which everyday commodities were accumulated and embedded in acrylic resin, and Shiro Kuramata's Miss Blanche chair (1989), in which artificial roses were embedded in the bottom seat and the arm rests, their multi-layered image was an appealing utopian possibility of the 20th century. Although it is made of chemical product, it seems that the warm feeling of the texture that Yamamoto brings out in his work is similar to that of historical texture towards ‘the future of the past', and I wonder if this is true.

By saying it is a double nostalgia that lies in Yamamoto's work, I don't mean that his works are old fashion.
You are presented with colourful but blunt shapes (circles in most cases) in his work, but these circles, which are embedded in resin, give the viewers mixed feelings - they can be frustrating as the viewers cannot touch them, but the work has a calm atmosphere, which would even accept the fact that they cannot be touched. The circles that we perceive in the work are actually just outlines (or in another word, definition) that were the void from other shapes. The work also comes with an illusion, in which the circles are fixed but are frailly floating. In any case, it is about absence. Jasper John's works of American national flag and target were made from a cynical perspective, in which he clarified the absence by making the ideological formation that the symbols have into painting (hence there is no 'real' thing), but what Yamamoto's work conveys characteristically is that he adores (and gives up) something that he cannot possess.
In 2014, Yamamoto produced a series of work, Parallel Circles (Concentric) ※fig.2, which clearly had a reference to and was homage to John's Target, and it was evident that there was a 'lack of an issue point' and his 'adoration of having an issue' and what embodied the work was its artistic quality and his hand work. But his way of referencing is not like that of the ill-mannered, disordered eclecticism in the 80s post-modern paintings, but it is rather ambiguous conservativeness that exists within the beauty.

Moreover, his work definitely reflects our time somehow, and I feel that is why his work gives me a sense of uncomfortableness as well as the reason for paying attention to his work in progress how he creates his 'situation'. 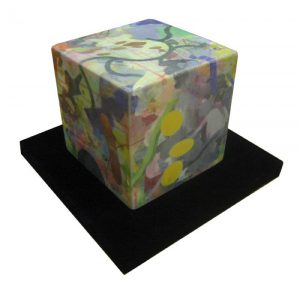 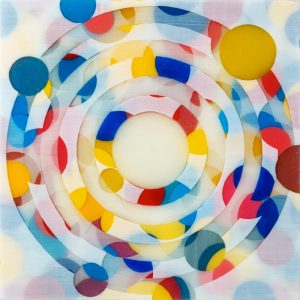