Chikako Furihata (Chief Curator, Meguro Museum of Art) / 2015
1. Encounter
In this text, I would like to write about the distance created by internal 'layers' within an image and the floating 'colours' in them,
which reflects upon our eyes.
The first time I encountered Yuki Yamamoto's work was at an Art Fair Tokyo 2013. As I was about to leave the fair feeling exhausted after walking around the huge venue and talking to a number of gallerists, I noticed there were works emanating soft light from a booth in the corner. The works had various sizes of circles, which were composed rhythmically, and they gave a somewhat floating feeling of the colours surrounding the entire work. Perhaps, my tired eyes contributed to this strange sensation.

It was the kind of work that I'd never come across before - its numerous layers were filled with graceful colours of light with a soft texture that grabbed the viewer's eyes. When you looked closely, you could see on the surface of the rectangle, some circles were
given colours and other transparent or translucent, and layers intertwining one another. The light was overflowing from its compressed distance of only a few millimetre thickness. They were colourful and those colours had humidity in them. There were slightly blurry shadows that appeared on the edge of the circles.

When the painter started talking to me, I couldn't keep my eyes off those circles, that had a depth within the image. After staring at them for a while, it reminded me of something – a moon in the night sky. The moon shines when the light is reflected on it, and it shadows blue light onto the ground. When I look at a full moon,
sometimes I just cannot get my head around the relationship between what I see in the sky and on the ground. Sometimes it looks like a full moon attached to the darkness, but other times it looks as though there is a hole in the darkness, and I love to imagine different stories about them. When the air is very clear between the 'moon' and ‘I’, or when humid air surrounds the area, the moon looks completely different how it reflects the light. There is an invisible line of 384,400km between the 'moon' and ‘I’, and countless stars exist seemingly floating in-between. I imagined compressing them in my head. I wondered if it would look like the painting in front of me right now, if the light of all these stars are compressed into this. This is what I was thinking about when I came across Yuki Yamamoto's work for the first time at an art fair venue.


2. Condensed Distance
The idea of one line that connects 'moon' and ‘I’ that I envisioned when I saw Yamamoto's work came from a 16mm film, 『Powers of Ten』 (1968), which was produced about fifty years ago, and was produced by Charles and Ray Eames, the designers/creatives, who made their name in mid-century America, and I absolutely I admire their work. This masterpiece is still often referred to in the art & science field, and although it is a short film of only 9min, it is a spectacular film that takes the viewer to a journey from the universe to the elementary particles.

The film begins with a overhead view of a man sleeping on the lawn, and the viewpoint, whilst keeping the 10x10m frame, zooms out to a view ten meters across, which will continue at a rate of one power of ten until the camera comes to 24 to the power of 10 or the size of the observable universe. The camera zooms back at a much faster rate and comes back to the hand of the man in one minute, and continues into the cells of the hand until it comes to quarks in a proton of a carbon atom in 10 to the minus 16th power. This is a journey in time and in distance from universe to the elementary particles. Although this was a time when computer graphics did not exist, this film, which was handmade combining animation and live-action scenes, which, it is fair to say, foresee the structures of layers on computers in the modern world. What is unique about this film is that, even though it deals with a spectacular scale of distance inbetween, the viewers are always faced with one thing, which is the hand. It is about the way we perceive the boundless layers of air and time. Because of this Eames' film condenses time and distance, I envisaged 'moon' and ‘I’ when I first saw Yamamoto's painting.
In fact, Yamamoto actually produces work by carefully making layers one onto another. Within just 5 to 10 millimetre thickness between the foundation and the surface layer, there is condensed time of production scrupulously planned. It is a repetition of the act of 'painting' starting with a brush, masking it, painting it and sanding it. If you look at the canvas from the side, the cross section of the painting is beautiful. The artist carefully observes the surface, and composes many layers on top of another. Yamamoto's method somehow overlaps the method of digital media representation where layers of information and images piling up on the desktop screen. The idea of layer structure in today's digital media is fundamentally a common one for Yamamoto's generation, and he does say he is familiar with it, but his production is strictly analogue and his work is very much a painting as he paints the depth of vast images on the physical plane.

3. Beauty of Floating Transparent Colour
What was the strange sensation of colour that I had when I saw Yamamoto's painting? In the beginning of the text, I wrote that it had a soft texture that sucks the eyes. The artist chooses acrylic as his medium and brushes to paint transparent layers and colourful circles, and controls the composition of the circles and the colours by masking them. It is a repeated procedure of what seems random and automatic, and what the artist attempts to present on the plane is the illusion in details.
It was the impressionists and the neo-impressionists who incorporated broken strokes of colours, which were painted and layered onto a canvas, and the colours were not mixed on their palettes, but in the eyes of the viewer instead. In Yamamoto's paintings, the colours are mixed in a depth of colours, which was created by laminating coloured layers in-between transparent ones. When a light shines through those layers, it creates an illusion of shadow, light and colour, which grab's viewers' attention. The colours, which were mixed in the viewer's eyes by the technique of the artist, have high contrast and brightness. It seems that this is why his paintings give a sense of floating within the image.
Take Stratified Circle (6 Colors/3 Squares/5 Dots) (fig.01) as an example, you can see that there was a meticulous planning in the mixing of colours and light by composing the layout of the circles placed according to a certain set of rules and spread the image at the same time. Place 3 circles in various sizes on small, medium and large squares and shift their locations slightly from one another. There are 6 colours in layers with masking circles, where there are layers of transparent acrylics. Depending on the size and location of circles that were masked, the colours you see in the painting would look different, and the colours are mixed by the number of layers. The colour that has largest area is brown and the colours are mixed after the entire 6 layers of colours, whilst brightness stays low but the contrast is still there.
On the coloured circles, a transparent layer masked exactly where the circle is and you can see the colour behind the transparent layer. The transparent circles, which look white, appear by being masked from the bottom layer to the top, and you can see shadows of the colours on the edge of the circles. By carefully considering the depth and the composition, the painting creates a depth and a spread as a painting space.
Moreover, I would like the viewers to look at the composition of colours. The way he does it resembles the modern painters, who carefully composed coloured shapes. For instance, when you look at western paintings focusing on the colour red, Matisse composed with a balance in mind with the neighbouring colours, how location and the size of the areas of the red placed within a frame. There is a red that is small but dominant and there is also a large red, which easily reflects other colours. That's how the perfect balance of an image is created.
In Parallel Circles (Two) (fig.2), it appears that the circles are randomly laid out, but in fact, the location of each circle in the painting is carefully calculated, and the painting is not complete without any of them. Especially the location of the red circles is thought through. The work is is composed with only circles, but because of the choice of the colours and the perfect composition of the circles, it is apparent that it offers a complete view as a painting. It can be said that the artist's has a challenging attitude as he explores the depth in the expression in painting by setting himself a set of certain restrictions such as painting in circles, masking, and laying transparent layers. It is a journey of the eyes across the floating colours between the layers that the image has in Yamamoto's painting. I am looking forward to more of his new developments in the future. 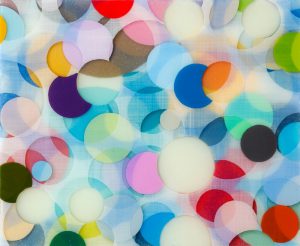