Kishio Suga (Artist) / 2011
It may seem easy, but it certainly is difficult to incorporate various components of actual space into our senses and consciousness, accepting them as they are.

Since human beings can be described as egoistic animals, it is quite natural for each one to try to distinguish himself or herself from the others.

Whether such discrimination is expressed overtly or conveyed calmly, without excessive enthusiasm, differs from person to person.
The latter could be applicable to Mr. Yamamoto.
His works are not likely to be produced without his stable 'viewpoint' in everyday life.

His works have a great deal of symbolic and abstract characters.

In general, it is difficult to capture color and light from one's surroundings, taking precedence over other elements in his/her ordinary field of vision.

'Reading differences' is the key to interpreting Yamamoto's works.
----Differences among people, between people and objects, and between one object and another,
and differences in a space caused by the objects in it.

These circumstances vary widely depending on manner of perception.
In Yamamoto's paintings, circles of various sizes overlap, filling up the entire pictorial space.

An invisible entity is assumed to exist around the painting, which gives the illusion of infinity in the spreading space (ground).

In Yamamoto's works, 'spreading' gives a substantial sense of depth.

The actual space in our everyday lives is a so-called 'space of distance,' in which we can transfer from front to back and side to side.
The space filled with colors and circles in his paintings suggests invisible depths, while at the same time represents a non-antagonistic and indeed conciliatory stance.

This is surely related to the artist's everyday living. 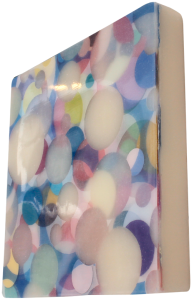 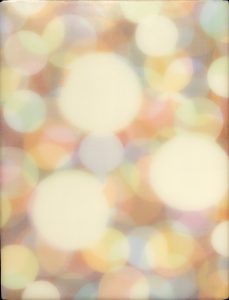