Homage to the Sphere – Yuki Yamamoto

Benjamin Dodenhoff (Curator Peter und Irene Ludwig Stifung) / 2020
Yuki Yamamoto's paintings are what visual designers refer to as "eye candy". In contrast to an "eye-catcher", which attracts attention only for a short time, "eye candy" captures the viewers' gaze and tempts them to keep looking, savoring the visual experience like a delicacy. Yuki's pictures offer such intense visual pleasure that it is difficult to look away. This is remarkable, considering that his works rely upon the use of only a singular motif, the circle. This one, however, is treated with great creative drive. The compositions show an exactly orchestrated balance between chaos and order that neither overwhelms nor bores its viewers. How does this viewing experience come about?

Based on the untitled painting 20XX (ill. P. XX), Yuki's working method can be exemplified. The initial impression of an arbitrary distribution of circles is a deceptive one. A closer look quickly reveals evidence of a systematic image construction. A good example is the red circle in the upper left corner. Its diameter is a reference point for numerous other circles in the painting. For instance, it functions as a starting point for a series of circles reappearing vertically in consistently increasing intervals on the left edge of the painting. Hence, the second circle is placed half a diameter below the first, so that their centers intersect. The third circle follows at twice the distance below, thus touching only the outer edge of the second one. Another doubling of the distance creates a free space between the third and the fourth circle that is exactly one circle diameter. At this point, the logic of progression shifts. The next circle follows at a distance of three full diameters instead of the expected two. It cannot be decided whether the deviation from the doubling rule is an exception or an indication of a higher-level rule, since the progression is interrupted by the edge of the canvas. Further imaginary circles would all be placed outside the image space. Due to the progression's abrupt end on the painting's edge, the sequence points beyond the boundaries of the image itself. Yuki proceeds similarly with other individual circular shapes that are partially cut from the edges of the painting. As a result, the painting does not depict a closed space, but one that is open to all sides. This impression is reinforced by the fact that the compositions dispense with both a center and pronounced symmetries. Yuki's pictures look like excerpts from an infinite space.

The entire painting rests on subtle tectonics. The row on the left edge of the painting forms the vertical of a grid that forms the basis of the picture and measures 10.5 circle diameters in height and 8.5 circle diameters in width. The yellow circle on the right and an opposite blue one on the left edge of the picture mark the horizontal width. One would expect that all other circular shapes would derive from this grid. It is therefore all the more surprising that at the first opportunity Yuki undermines the systematics that he himself implemented. The yellow circle on the left edge of the painting - the bottom one of the row described earlier - has another yellow circle corresponding in its horizontal extension. The distance between the two shapes is apparently chosen arbitrarily and is not subordinated to the grid of full or half circle diameters. Here Yuki brings his image components into an unpredictable dynamic. His compositions suggest regularities such as reflections, series, progressions or grids, but he never formulates them to such an extent that they become a determining motif of the composition. Nevertheless, they remain perceptible under the surface of the image. Without these rules, the tectonics of the compositions would collapse, but a slavish adherence to the rules would freeze the composition into a geometric display board. The composition's tension derives from the balance between order and chaos.


“The elements above are elements that intentionally give rules to the order. To obscure them, there is an abundance of other random circles that I mix in to achieve a state of overall harmony. It is good if there are rules. However, there is no need to discern them. I think it's important to create a state where there are a lot of rules mixed together. The circles continue to affect vision beyond all rules. That is the diversity and potential of the simultaneous presence of order and chaos. " – Yuki Yamamoto


One of the most important elements in Yuki's paintings is color. Rules can also be discovered here. The color values of the circles on the left go through a comprehensible gradient that begins with red at the top, extends over various shades of orange and eventually ends in a strong yellow. A large pink circle that slides in front of the fourth and parts of the third cirlce interrupts the color sequence. It acts like a filter, which makes all areas covered by it appear blue. The depiction of this type of interplay of color values has an art historical forerunner in the work of Josef Albers (1888 - 1976), whose late work is devoted almost exclusively to this one subject. From 1950 to 1976, the former Bauhaus master created his famous work group Homage to the Square. Each painting in the series is based on a basic geometric scheme consisting of a central square that is slightly shifted downwards from the center, around which there are framed two or three further squares, within which Albers tried different combinations of color tones. The more than 2000 individual works reveal that the same color, depending on which other color tones it is combined with, appears transparent or opaque and can create the impression of spatial height or depth. But where Albers was keen to systematically examine the interaction of colors, Yuki's use of color is much more playful. While Albers' experimental set-up consists of a clear staggering of three to four layers of color, Yuki deals with a large number of levels that jump back and forth at certain points and whose number and sequence cannot be reconstructed by the viewers. Yuki is not concerned with analyzing color interactions, but with achieving a complex visual sensation that creates a polyfocal depth effect. In many ways, Yuki's works behave like an exuberant mutation from Albers' Homage to the Square. While Albers configurations appear static and closed due to their strictly symmetrical structure, Yuki's image spaces are flexible, dynamic and open. With each new layer of color, not only the formal complexity increases, but also the semantic field of association of the works.


"I am inspired by a wide variety of things, such as the cubistic multidimensionality, the multiplicity of the concept of time or even the theory of parallel universes that may overlap for short periods of time." - Yuki Yamamoto


In order to distinguish the title of Albers' series, Yuki's painting could be described as an Homage to the Sphere. The decision for the motif of the circle opens up a wide horizon of possible interpretations. In contrast to Albers' analytically neutral figure of the square, the round shape sets a chains of associations in motion, ranging from objects of the microcosm such as cells to objects of the macrocosm such as planets and stars. Yuki's spherical worlds synthesize a wide variety of ideas of the animate and inanimate cosmos. And the origin of the works can also be understood as an analogy of cosmic evolution. Just as the universe is based on elementary physical mechanisms, from which an infinite variety of phenomena developed, Yuki's pictures are based on an apparently simple order, then become more complex with each working step until they finally form a visual space in which the eye can never find an end. The multidimensional impression of the works is the result of a sophisticated optical illusion. Yuki's canvas is not a three-dimensional space, but a purely optical surface. If we indulge in the seductive poetry of the painting as an analogy of the cosmos, we must not be afraid of the consequence that neither one nor the other holds a final spiritual truth for us. The path to this knowledge, however, presents itself to the viewers as a precious and delightful visual journey. 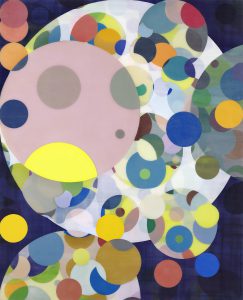